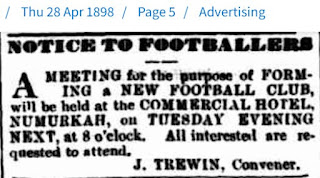 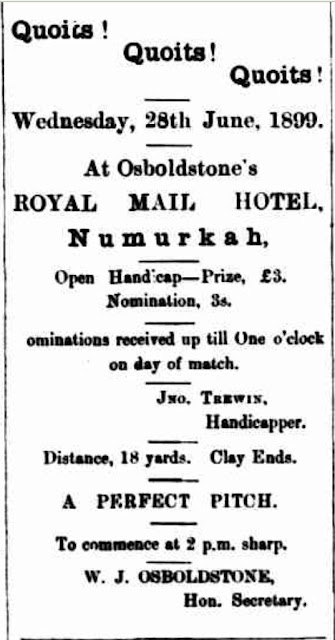 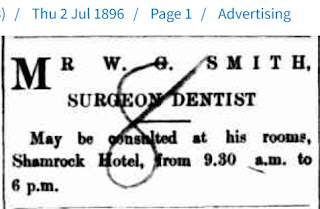 Above you can see a few advertisements from The Numurkah Leader in the 1890's. Today we think of Pubs as drinking and entertainment establishments, but they were so much more in the early development of towns in Australia. They were a place for communtiy activities when few other buildings existed.

The first Pub in Numurkah was run by Peter McCaskell. He and his wife, Catherine, were the first people to take up residence in the town and even named their daughter Florence Numurkah McCaskill to honour the fact. Peter McCaskill dispensed beer and lemonade from the back of his cart on his arrival in the town in 1877. The cart quickly progressed to a bark hut, the first building in the town, then work began on a more permanent weatherboard structure, which opened as the first Numurkah Hotel on the corner of Melville and Quinn Street (the site of the State Savings Bank in the picture below, next to the now Numurkah Hotel). In November 1877, a grateful traveler reported sleeping in the partly built Hotel that existed of a roof and walls, but, no windows or doors. He was protected from the rain that fell that night and slept well using his saddle as a pillow and a rug to cover himself. Peter McCaskill had put this traveler's horse in a paddock and provided the weary traveler with tea and breakfast. The early buildings of Numurkah were wooden structures and fires were a constant problem and many burnt down including several of the earliest hotels.

Although the town of Numurkah was proclaimed on 8 Feb 1875, the first land sales didn't occur until January 1878 and even then Peter McCaskill's block wasn't offered for sale, he had to wait until the middle of 1878 to buy the block his Hotel stood on. He also bought the adjacent block and two other corner blocks on Quinn Street. The Numurkah Hotel opened on a hot day in early 1878, to coincide with a race meeting that took place. It supplied refreshments to all despite the lack of a licence and a ball finished off the day. As the first permanent building in the town, it served many purposes. It was a post office, a place to hold socials and magic lantern shows, the site of the first Protestant service, as well as the first public meeting, and the first sale, whch was held in the yards of the Hotel. It was the centre of early community life in Numurkah. In 1881 an agency of the Commercial Bank of Australia opened in the dining room of McCaskill's Numurkah Hotel. By the end of 1881, there were four other Hotels in Numurkah, the Farmers'Arms, the Commercial, the Royal Mail and the Globe. Both the Farmers' Arms and the Globe were burnt down.
The extension of the railway line from Shepparton to Numurkah opened in 1881 and with it the people came too. Numurkah boomed as the service centre for the area. Unfortunately Peter McCaskill didn't live to enjoy the benefits of this boom, dying, aged 42, on 23 Jan 1882 only five months after the railway had opened. From 1881 to 1891 the population grew from 96 to 1011. When farmers brought wheat to town, they required a stopover of 2 days. More hotels opened. As part of their licence, hotels were required to have a light at the main entrance, if the street was unlit, have feed available in their stables, provide meals if asked for, ensure the safety of their patrons and if the hotel was more than 2 miles from a police station or morgue, receive a body for the purpose of an inquest if requested. The Telegraph Hotel, built in 1882, was the first two storey building and is the oldest surviving Hotel in Numurkah. It was built of red brick, in a Victorian Classical style, and represented the booming Hotel trade at that time.

Another Hotel originating back to 1882 was the Railway Gate Hotel built on the south-east corner of McDonald and Knox Streets owned by a Mr Thomas McTighe, who was also an original selector of land in the area like my great, great grandfather, Jeremiah McAuliffe and a close neighbour of his.

The Farmers Arms was the second hotel in Numurkah, originally a wooden structure that burnt down in July 1890.  The building that replaced it unfortunately was demolished before it's heritage value was realized. For those interested in VFL history, an early 1900's licencee of this hotel was the father of Dave McNamara, well known local and St.Kilda footballer, who was noted for his long kicking, one kick in particular of 84 yards, a place kick!

In 1901, Numurkah had a population of 1,125 and 10 hotels operated, showing the importance of these venues for the community.